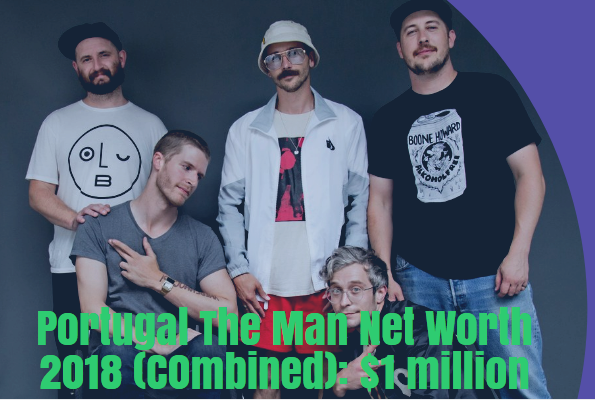 Portugal The Band is an American rock band with its roots in Alaska. Even though the band have been in this field for a long time, they received global recognition in 2018 for their single called “Feel It Still”. It became a Top 5 hit on the Billboard Hot 100.

The single was popular globally and went on to win “Best Pop Duo/Group Performance” in the 60th Annual Grammy Awards of 2018 for the single. Many people only know the band for this specific song but they have had a great career and great journey towards success.

Here are some interesting facts about the band Portugal The Band:

1.Portugal The Man net worth (Combined) is estimated to be $1 million

As of 2018, Portugal The Man net worth (combined) is estimated to be $1 million. With the success of their single which is part of the album “Woodstock”, they have been very busy touring all around the U.S, Australia, Asia, and Europe. Their schedule is already packed for the rest of the year with most of their performances being sold out.

The Woodstock album has also sold many units and even has a separate merchandise store for its die-hard fans. Their collaboration with Twin Peaks has also been a successful part of the tour. The worldwide tour is one of the bands major streams of revenue for the music that they create. They also get money through endorsements and royalty programs. Their song “Feel It Still” is even set to be the soundtrack of Apple’s new iPad Pro commercial and recently featured for the brand Vitaminwater as well.

2.The Man was actually started as a side project

In 2001, a band named Anatomy of a Ghost was formed. The band was actually very popular during its lifespan but eventually the self interests of its members resulted in the group’s separation. One of the members of the band, John Gourley actually started the band as a side project.

For opportunities, the band went to Portland in search of opportunities. During this time, the band was associated with Fearless Records with whom they released two albums. The band today after several rounds of changes, consists of members John Gourley, Zach Carothers, Kule O’Quin, Jason Sechrist and Eric Howk.

3.The band name Portugal. The Man has a lot of personal meaning

The name actually originated with the thought that a country is a group of people. The band did not want to have one members name in the band and when Portugal was the first name mentioned, they stuck with it.

The original member of the band John Gourley also mentions that he was actually intending for a book called Portugal. The Man be written. It was very personal to him as it was intended to be about his father’s and the adventures that he encompassed in his years.

4.The band signed with Atlantic Records back in 2010.

The group performed as an independent for 3 years before signing up with Atlantic Records in 2010. The first studio album in association with the label was John Hill. It had a newer style and feeling than their older albums and group of songs.

By 2011, they were touring all across Europe . During these years, the band was not successful in retaining and putting all of their band members together. In 2012, Kyle O’Quin decided to leave for his own personal interests. The very next year they gave their fans new music when they released an album titled Evil Friends to much critical acclaim.

Portugal. The Man’s latest album Woodstock’s work actually started in 2014 with them alreadytelling their fans on social media platforms about their platforms for a new album. They kept them in suspense for much of it showcasing small parts and tones of their finest work till date.

But the wait for the band seems to have been worth it as the album has been a big hit and has taken their band to the mainstream. Their recent Grammy win has helped their music and not only their single to have garnered attention. It seems that the veteran band is now at its peak and is fully enjoying the opportunities that they currently possess.